Yesterday afternoon, Friday 30th July 2021, the Canarian Government held another plenary session where they discussed the various measures the High Court of Justice has deemed unconstitutional to be enforced.

As you may have heard, this is not the only matter the High Court of Justice have taken issue with as they have blasted the State of Emergency and declared it illegal (more on that when more information is revealed), but getting back to the Islands; the Canarian Government is awaiting clarification regarding the limitations that must be removed.

The biggest issue has to do with restrictions for islands at Alert Level or Tier 4 (currently only Tenerife is affected) where 50% of patrons sat in the interior must have had both doses of the vaccine, a PCR test not more than 72 hours old or a certificate of having had COVID-19 in the last six months.

This meant the establishments are responsible for requesting this personal data from their customers which of course would have been met with resistence, so the Asociación Hostelería Unida de Tenerife (Tenerife United Hospitality Association) appealed this decision and the Court agreed with some of the points raised.

For now and due to the number of current cases, each island will remain at the same alert levels as last week. We’ll have to see what unfolds after the High Court deliberates…

Mayhem and more mayham as Social Security realizes the error made last month when processing payments and deductions as some sole traders renewed their right to continue receiving Sole Trader “Unemployment” Benefits whereas others opted out.

The situation is as follows… Around 250.000 business owners chose to continue receiving unemployment benefits whilst trade is still slow due to Covid-19 but many who had been receiving payments decided to discontinue either because business had picked up and they could manage without additional help or because their income forecast for summer trade would exceed the maximum permitted by Social Security to qualify for benefits.

Those who discontinued benefits would instead receive reduced rates on their Social Security contributions from June to September; now, my clients in this situation will remember when I said at the time that since it was possible to apply for continued benefits until August, it is likely Social Security would charge as normal in June and July and wait to see which business owners are still receiving payments and then deduct two months contributions at the end of August as that seemed the most logical course of action. However, this did not happen and surprisingly, Social Security implemented deductions straight away.

This is partly where the problem lies because not only did they apply deductions virtually across the board meaning that many sole traders only paid 10% of their normal monthly contribution even though they had applied to continue receiving payments; but the Mutuas correctly refunded these sole traders a percentage of the Social Security contribution as part of their benefits payment.

What does this mean? Well, not only were the affected sole traders charged 90% less by Social Security but they were also reimbursed part of the contribution by the Mutua (double whammy!) so in many cases, these business owners now owe Social Security a minimum of 250 euros depending on their base rate.

How has this happened? Social Security and the Mutuas are independent entities so the information is not picked up immediately, so Social Security did not have the necessary data to determine who was entitled to the 90% reduced rate in June. Again, this is why at the time I had assumed they would wait until the end of August before applying any deductions as they would have sufficient information by then but they didn’t do that.

The second scenario is that other business owners are owed money by Social Security because they paid the full contribution in June when they should have only paid 10%. In this case, they must request the appropriate refund directly.

The third and final scenario is those sole traders who had been receiving benefits until May but opted not to renew this right correctly paid 10% of their normal contribution in June and will continue receiving discounts until September. In this case, the sole trader neither owes nor is owed anything.

Bottom line… Check your June bank statement to see what Social Security you paid and what you received from the Mutua to verify whether you are one of the affected business owners who now owes Social Security. If you are unsure, please contact me about it. So far Social Security has not released clear information as to how they intend on regulating these payments, but I’m sure they are working on a way to fix this big mistake!

As is now custom, the Canarian Government convened yesterday afternoon to discuss the latest island statistics and adopt decisions and new measures where necessary.

This week some islands have moved tiers, but these changes won’t come into immediate effect and instead it has been delayed until midnight of Monday 26th July 2021 to make it easier to shift from one alert level to another and apply the restrictions of each one.

Over the weekend and despite the changes approved yesterday, each island will maintain the restrictions that apply to the tier they were on:

From Monday 26th July 2021, the established Alert Levels will be:

Fuerteventura remains at Alert Level 3 so nothing changes for us.

Have a great weekend all 🙂

Tráfico is moving forward with plans to replace the warning triangles used to alert other road users when a vehicle breaks down with V16 emergency beacons. Triangles were introduced in July 1999 but this system is going to be modernized with a beacon that is placed on the roof of the vehicle and emits an orange warning light.

Jorge Ordás, Tráfico’s General Deputy Director of Transportation and Technology explains that the warning triangles will be substituted for an alternative system primarily because of the number of fatalities on Spanish roads that have been recorded due to drivers exiting their vehicles to place or collect the triangles on the road. This raised a serious safety issue that needed to be addressed.

How Does the Beacon Work?

To alert other road users to our situation, the beacon is placed on the highest part of the vehicle to guarantee maximum visibility. The way the beacon is designed allows for the driver to place it on the roof of the vehicle without having to set foot outside, by simply putting your arm through the window and therefore lowering the risk level. The beacon has a double function in that every 100 seconds it sends a signal to DGT (Tráfico) Cloud 3.0 and this information is relayed to motorway overhead gantry signs (this function won’t be any good to use on Fuerteventura as we don’t have overhead signs but the rest of Spain will benefit from it) to confirm the location of the vehicle and advise other drivers as they approach the scene.

When are the Beacons Obligatory in Spain?

The switch from triangles to emergency beacons becomes obligatory from 1st January 2026, however, from 1st July 2021 drivers are permitted to use beacons with or without geopositioning location service. From 2026, the triangles will be obselete and as you can imagine fines will apply if drivers do not comply with the changes. From a safety point of view, it wouldn’t hurt to buy the beacon now for approximately 25 euros.

If you must get out of the vehicle, make sure it is done safely and only if there is a secure space off the road and always in the opposite direction to the flow of traffic. If a safe space is not available, drivers are urged to remain in their vehicles with their seat belts fastened until road assistance arrives to save the day.

PS: It sure feels good to write about something other than the pandemic again!

Yesterday, Thursday 15th July 2021, the Health Department convened to discuss progres on each island based on reports on the number of recorded cases and unfortunately for us, Fuerteventura joins Tenerife at Level 3. The only other change made was to La Palma whose increasing cases sees the island go up to Level 2 whilst the remaining islands stay where they are.

According to statistics between the 30th June and 13th July, 352 COVID-19 cases were reported on Fuerteventura; this represents an average of 25 new daily cases. This means that Accumulated Incident Index went from high risk to very high risk on 9th July. Fortunately, no associated deaths nor ICU inpatients have been recorded, however, this apparent outbreak raises concerns.

As we are all aware, each level has specific restrictions, so lets quickly summarize what that means for us here on Fuerteventura. According to the Official Canary Islands’ Bulletin (BOC) published on 9th July 2021, at Level 3, the following limitations apply:

This is a massive blow as it feels as though things were just starting to pick up again but this virus is here to stay so if we all do our part, we can curb the numbers and hopefully go back down to a safer level soon.

COVID-19 UPDATE: Fuerteventura Moves Down to Alert Level One
October 17, 2021 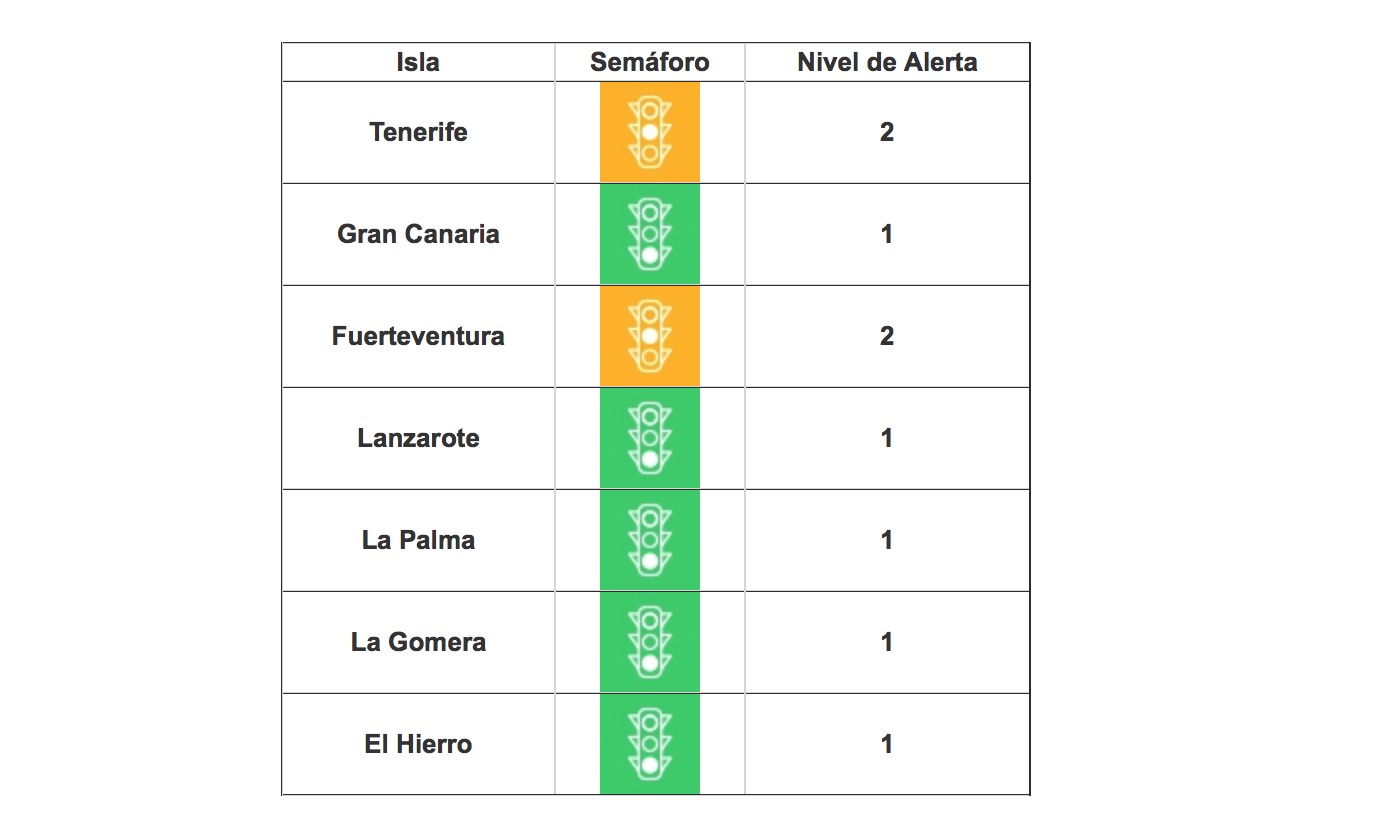 Chaos at Social Security. Sole Traders may have an Outstanding Debt Due to Renewal of Benefits in June
July 27, 2021

COVID-19 UPDATE: Fuerteventura Moves Down to Alert Level One
October 17, 2021

Chaos at Social Security. Sole Traders may have an Outstanding Debt Due to Renewal of Benefits in June
July 27, 2021